On September 28, 2022, BloombergNEF released the report “Japan’s Costly Ammonia Coal Co-Firing Strategy,” an analysis examining the economic feasibility and implications of Japan’s plans to co-fire ammonia and coal in its transition to a zero-emission society by 2050.

On the economic feasibility of ammonia co-firing, the report concludes that “Ammonia co-firing is unlikely to become an economically viable path for Japan to reduce power sector emissions.” It compares the levelized cost of electricity of ammonia co-firing to renewable energy sources such as solar and wind, concluding that “retrofitting coal plants to burn ammonia is economically unviable, especially with a high co-firing ratio” and is “uncompetitive against other low-emission technologies.” Essentially, the cost of co-firing ammonia increases as more ammonia is introduced into the mix, meaning it will only get more expensive over time as renewables become cheaper, and this is regardless of where the ammonia is produced or what energy source it is produced from. 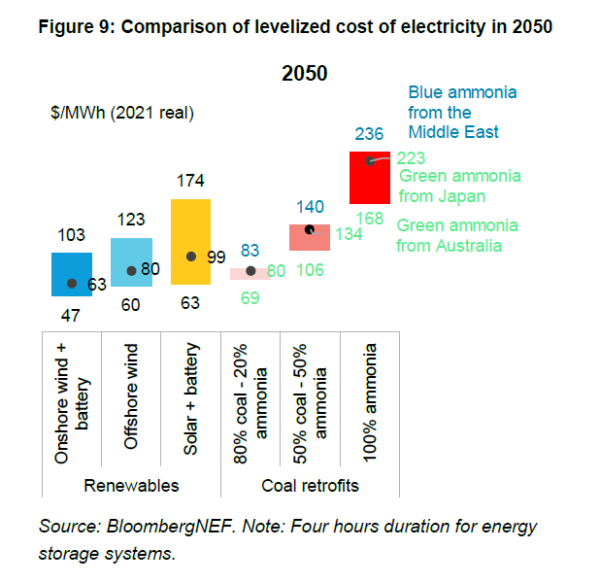 The report also looks at the feasibility of carbon capture and storage (CCS), but states that “Japan is unlikely to contribute to the pre-2030 deployment of CCS technologies” and that “the technical and economic feasibility of such an approach is still uncertain.” This is not a feasible timeline for decarbonization, since it has been determined that OECD countries need to completely phase out coal-fired power by 2030 in order to meet the Paris Agreement’s 1.5℃ goal.

The CO2 emission reductions of ammonia co-firing are also questioned in the report, pointing out that a retrofitted coal power plant co-firing ammonia at 50% or lower rates still emits more CO2 than a natural gas-fired combined cycle power plant, and that burning ammonia can lead to emission of other GHGs such as nitrous oxide (N2O), which has a global warming potential (GWP) 273 times larger than that of CO2 on a 100-year timescale.

The global supply of ammonia is another significant issue pointed out in the report. Compared to the International Energy Agency’s (IEA) projections for global ammonia production, the demand targets Japan has set are too ambitious; by 2050, Japan’s target would require 11% of the global demand of ammonia. 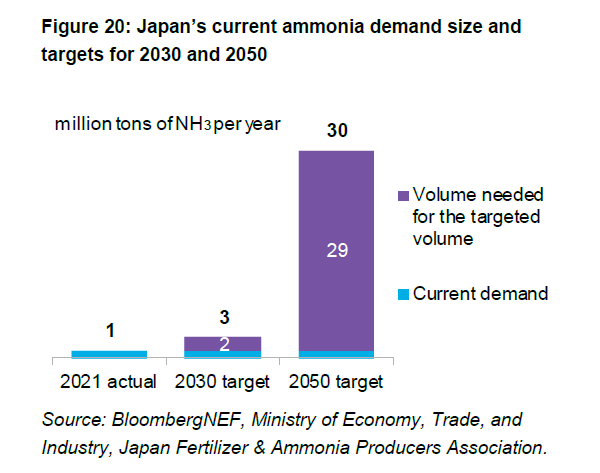 Finally, the report emphasizes that co-firing ammonia presents substantial risk for Japan’s energy security. Because of the immaturity of ammonia co-firing technology, higher levels of ammonia firing will not be feasible until many years in the future, meaning that Japan will continue to rely on coal imports for decades.

Moreover, due to the high projected costs of domestically-sourced green ammonia, Japan will need to import the majority of its supply of ammonia from abroad. Japan’s energy security may actually worsen in the long-term, as it would now be relying on two imported commodities to operate coal-fired power plants. 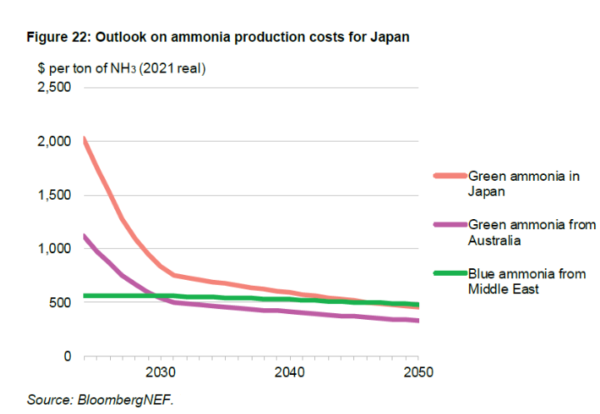 This report shows that Japan’s strategy to decarbonize its energy sector through ammonia co-firing is not only bad for the climate – it’s also bad for Japan’s economy and energy security. With renewables only getting cheaper as the rest of the world replaces its coal-fired power with renewable energy, Japan must seriously consider how it will meet its Paris commitments and decarbonize in a way that provides the greatest benefit to its society, economy, and standing in the world.