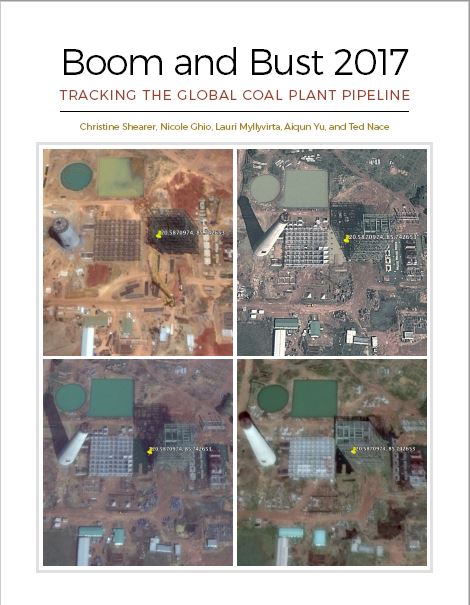 WASHINGTON, D.C. — The number of coal-fired power plants under development worldwide saw a dramatic drop in 2016, mainly due to shifting policies in Asia, according to a new report released today by Greenpeace, the Sierra Club, and CoalSwarm. The report, Boom and Bust 2017: Tracking The Global Coal Plant Pipeline, is the third annual survey of the global coal plant pipeline. Its findings include a 48 percent decline in overall pre-construction activity, a 62 percent drop in new construction starts, and an 85 percent decline in new Chinese coal plant permits.

Reasons for the rapid fall-off include a dramatic clampdown on new coal plant projects by Chinese central authorities and financial retrenchment by coal plant backers in India. In China and India, construction is now frozen at over 100 project sites.

In addition the decline in new plant development, the survey also found a record-breaking 64 gigawatts of coal plant retirements in the past two years, mainly in the European Union and the U.S. — the equivalent of nearly 120 large coal-fired units (see note).

According to the report, the combination of a slowed new coal plant pipeline and an increase in outdated coal plant retirements brings the possibility of holding global temperature increase to below 2°C above pre-industrial levels “within feasible reach,” provided countries continue to step up action.

“This has been a messy year, and an unusual one,” said Ted Nace, director of CoalSwarm. “It’s not normal to see construction frozen at scores of locations, but central authorities in China and bankers in India have come to recognize overbuilding of coal plants is a major waste of resources. However abrupt, the shift from fossil fuels to clean sources in the power sector is a positive one for health, climate security, and jobs. And by all indications, the shift is unstoppable.”

“The staggering uptick in clean energy and reduction in the new coal plant pipeline is even more proof that coal isn’t just bad for public health and the environment — it’s bad for the bottom line,” said Nicole Ghio, senior campaigner for the Sierra Club’s International Climate and Energy Campaign. “Markets are demanding clean energy, and no amount of rhetoric from Donald Trump will be able to stop the fall of coal in the U.S. and across the globe.”

The report singles out Japan, South Korea, Indonesia, Vietnam, and Turkey as countries that have failed to develop their renewable energy sectors in step with their peers and continue to build and plan new highly polluting coal plants.

Note: A typical coal-fired generating unit is 500 megawatts, or 0.5 gigawatts, in size, with most power stations having two or more such units.

About the Sierra Club
The Sierra Club is America’s largest and most influential grassroots environmental organization, with more than 2.7 million members and supporters. In addition to helping people from all backgrounds explore nature and our outdoor heritage, the Sierra Club works to promote clean energy, safeguard the health of our communities, protect wildlife, and preserve our remaining wild places through grassroots activism, public education, lobbying, and legal action. For more information, visit www.sierraclub.org

About CoalSwarm
CoalSwarm is a network of researchers seeking to develop collaborative informational resources on coal impacts and alternatives. Current projects include identifying and mapping proposed and existing coal projects worldwide, including plants, mines, and infrastructure. For more information, visit www.coalswarm.org

About Greenpeace
Greenpeace is an independent global campaigning organisation that acts to change attitudes and behaviour, to protect and conserve the environment and to promote peace. Greenpeace is present in more than 40 countries across Europe, the Americas, Asia, Africa and the Pacific. For more information, visit www.greenpeace.org