Why construction plans for coal plants come back from the dead?

Most of these plans had been proposed in the late 1980s or later as power plants consisted of more than one unit. At that time, certain units were constructed but others were never built. In a supply plan publish by utilities every March had not mentioned these power plants, the projects had been listed as “planning” for 10 years ahead and treated as dormant. A similar case had been seen for nuclear power plans in the past.

The turning point was when a “supply plan” was issued in March 2014. The tide is turning in the coal industry’s favour with many coal power construction emerging. As the government introduced bidding scheme for thermal power plants, Tohoku Electric Power, Chugoku Electric Power and Kyushu Electric Power started to bring back their dormant construction plans. The utilities used the bid scheme and open bid process, but with no bids from other companies, the utilities themselves took part and subsequently won the bid, allowing utilities to construct the projects. Three bids showcased such farce.

There is another problem of these resurrected construction plans. Since these plans were already approved in the past, they are not required to go through the current EIA process. At all three power stations, the first unit had been built long before the current Act for Assessment of Environmental Impacts was issued in 1997. Noshiro No.3 and Matsuura No.2 were approved under the former assessments, so-called “Ministerial Assessment” or “Cabinet Assessment”. According to documents recently released at a Ministry of Environment meeting, all units of the Noshiro power plant (Tohoku Electric Power) were approved in 1981, and Matsuura No.2 was approved in March 2000. There is no environmental information available.

Regarding the Noshiro No.3 unit, Tohoku Electric Power released documents and held an explanatory meeting in Akita prefecture in October 2015 as a part of their “Voluntary Assessment”. They also released their construction schedule on January 13th 2016, which stated operations for Noshiro N.3 will begin in June 2020. Kyushu Electric Power, on the other hand, has not disclosed any environmental information on Matuura No.2. Even though it is hard to believe that these resurrected units will not use the technologies planned in 15-years ago, the units with 600-1000MW size should be re-assessed by the government. A document METI released mentioned that the Chugoku Electric Power would be assessed for Mitsumi No.2 unit in the future but no details have been made available at this point in time. 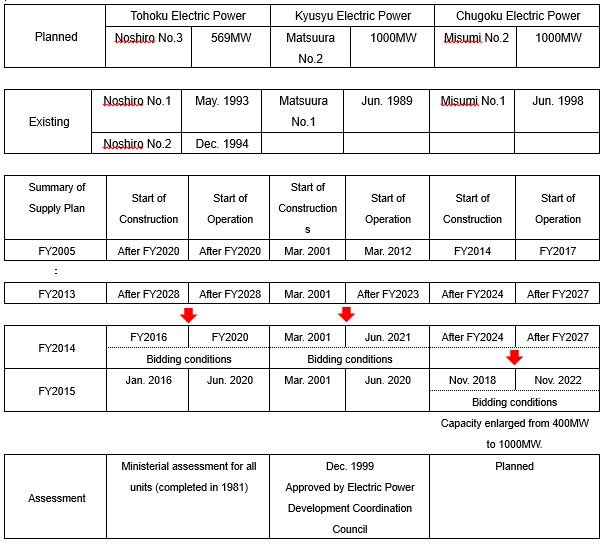