The table below shows shareholder proposals that were submitted to the four companies and the results of the voting at each proposal’s respective general shareholder meeting. 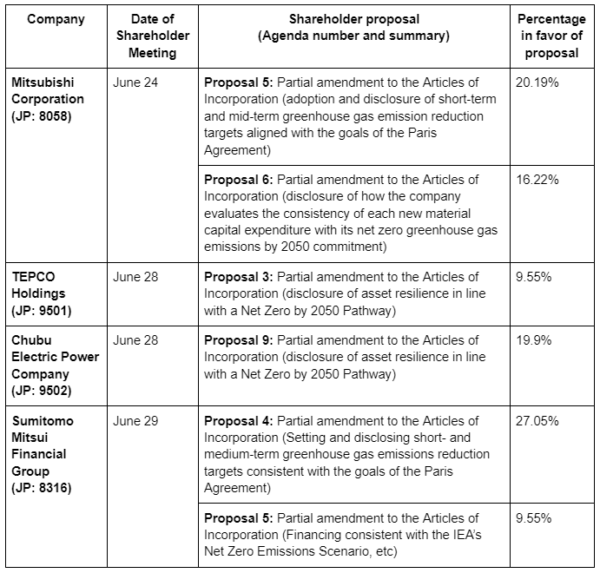 Of particular note are the results of resolutions submitted to two of Japan’s major electric power companies, Tokyo Electric Power Holdings, Inc. (TEPCO) and Chubu Electric Power Company (Chuden). Although both resolutions did not pass, the number of votes in favor of the resolutions at both companies was notably high, indicating that many shareholders are demanding that the power utilities step up their decarbonization efforts.

The shareholder proposal to TEPCO and Chuden, who share 50/50 ownership of JERA, Japan’s largest thermal power generation utility, calls for the holding companies to improve their management of climate risk while taking into account JERA’s roadmap to decarbonization. Given that 54% of TEPCO’s shares are held by the Japan Nuclear Damage Liability and Decommissioning Corporation, i.e. it is effectively a nationalized company, a 9.55% vote in favor of the TEPCO resolution could mean that more than 20% of shareholders support it.

Furthermore, at the general shareholders meeting of J-POWER, Japan’s second largest electric utility after JERA, held on March 28, 25.8%, 18.1%, and 18.9% of shareholders voted in favor of three shareholder proposals from foreign institutional investors, which called for strengthening the company’s decarbonization strategy. Taken together, this indicates that the importance of financial disclosure of climate risks is recognized by shareholders of electric utilities.

The voting results of these shareholder proposals indicate a growing awareness of the risks posed by climate change and the importance of related disclosure, as well as expectations for action to align decarbonization efforts with the Paris Agreement. Companies facing challenges from climate-related risks are being scrutinized more closely than ever.

In addition to the shareholder proposals by environmental NGOs listed here, several other shareholder proposals were submitted this year calling on various companies to take action to achieve net zero, improve information disclosure or transparency, and expand the use of renewable energy.

The world is now watching to see how companies will proceed with their measures in response to the results of this year’s general shareholder meetings votes, which showed the desire of institutional investors and shareholders for these companies to take action to combat the serious, global threat of climate change.