German NGO Urgewald and 40 partner NGOs have released the 2022 update of the “Global Coal Exit List” (GCEL) ahead of the COP27 Climate Summit in Egypt, which will begin on November 6.

The GCEL database has been updated every year since 2017.

The GCEL provides in-depth data on 1,064 companies and over 2,000 subsidiaries operating along the thermal coal value chain. As the world’s most comprehensive public database on the coal industry, it is used by institutional investors around the world as a source of information to figure out risks due to climate change in portfolios.

In this update, it has become clear that many companies are still deeply involved in various coal-related businesses.

46% of the companies on the GCEL are still heading in the opposite direction of the movement toward global decarbonization. Out of the 1,064 companies in the database, 490 are developing new coal power plants, new coal mines, or new coal transport infrastructure
476 Gigawatts (GW) of new coal-fired power capacity are still in the pipeline worldwide. If realized, these projects would increase the world’s current coal power capacity by 23%. As China is responsible for 61% of all planned coal power capacity additions, it comes as no surprise that the top 4 coal plant developers on the GCEL are Chinese companies. Many Japanese companies are also listed on this database.

China Energy Investment Corporation was the world’s top thermal coal producer in 2021, and it was closely followed by Coal India.
Companies on the GCEL aim to develop new thermal coal mining projects with a volume of over 2,500 million tons per annum (Mtpa), an amount equal to over 37% of the world’s current thermal coal production. The bulk of these projects are in China (967 Mtpa), India (811 Mtpa), Australia (287 Mtpa), Russia (144 Mtpa) and South Africa (91 Mtpa).

There are over 6,500 coal plant units worldwide with a combined capacity of 2,067 GW. Out of the 1,064 companies on the GCEL, just 56 companies (5.3%) have announced a coal exit date up to now, and only 27 companies (2.5%) have announced coal exit dates that are aligned with the 1.5°C target set out in the Paris Agreement.
According to the IEA Net Zero by 2050 scenario, coal power plants in high-income countries must be retired by 2030 at the latest and in the rest of the world by 2040. Many OECD countries like Italy, France or the UK have set a national phase-out date for their coal power plants, but the US and Japan have not. 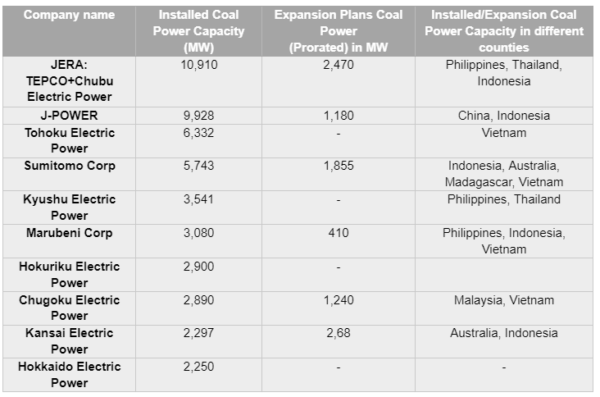