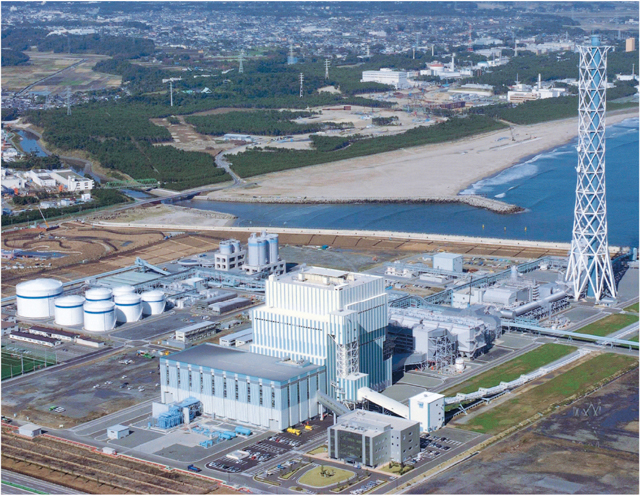 On December 6th, 2013, Chubu Electric Power Company (Chubu Electric) and Tokyo Electric Power Company (TEPCO) announced that they have established a new company, “Hitachinaka Generation”. This new company, which they have been planning since November, 2012, along with TEPCO’s power bid, are both part of the 2 utility companies’ efforts to build and operate new power plants after 2020. As one of the successful bidders of TEPCO’s bid, Chubu Electric plans to join TEPCO in building a new coal-fired power plant with a final output of approximately 600 MW on the site of TEPCO’s Hitachinaka Thermal Power Plant in Ibaraki prefecture.

The two utility companies plan to use ultra-supercritical (USC) technology to generate pulverized coal-fired thermal power as their “Best Available Technology (BAT)”. Using BAT is required to speed up the environmental assessment process; this was decided by the Japan’s Ministry of Economy, Trade and Industry (METI) and Ministry of Environment (MoE). Speeding up the environmental assessment process was introduced mainly for the replacement of aged plants, however, it seems that new plants are also eligible for this sped up process if they are built on an existing plants’ sites.

At this new company, where Chubu Electric will have a 96.55% stake while TEPCO will have 3.45%, it was reported that Chubu Electric intends to sell electricity not only to TEPCO but to other companies. To start construction of the power plant by 2016, and operations by 2020, Chubu Electric and TEPCO plan to apply for an environmental assessment before the end of 2013 (which will last until 2016).

Another recent development regarding USC power in Japan is the speed at which the environmental assessment is progressing for the replacement of J-POWER’s Takehara No. 1 coal-fired thermal power plant. The plant, located in Hiroshima, is set to utilize USC technology. The plan to replace the plant was first announced in 2010 with plans to start construction in 2014 and operations by 2020.

Comparing the fact that the entire process of the replacement (from the announcement of the project to when operations will start) will take 10 years for the Takehara power plant, the 7 years that will take to put the Hitachinaka power plant into operation, although new, is quite short.

Considering the lifetime of power plants, if power plants like these begin operations in 2020, they could run until approximately 2060. Until then, the power plants will spew out large amounts of CO2. Should we be overlooking these facts?

Currently in Japan, no decisions have been made yet in terms of a mid- to long-term energy plan or climate policy. Without fully considering energy and a climate policy, we shouldn’t approve the construction of new power plants that emit dangerous amounts of greenhouse gases so easily.

*TEPCO originally opened a bid for a total of 2,600MW, but the company only received bids for 680 MW. It is said that TEPCO may open up bidding again. If this happens, this may result in more coal-fired power plants being proposed.