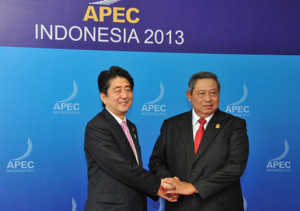 The proposed coal-fired power plant in Batang, Indonesia has been under fire for the dirty emissions it will produce if it were to be built. Although the project was set to start in October 2012, it had been stalled due to opposition from local and international environmental groups as well as problems with land acquisition. This month, a spokesperson from one of the major investors, J-Power, confirmed that the project will be pushed even further to October 2014 and postponed for one year. This is a small victory for the local’s resistance.

However, proponents to the project got a boost of support when Japanese Prime Minister Shinzo Abe voiced his support for the power plant at the APEC CEO Summit 2013 in Bali on October 7th. In his speech to APEC members, Prime Minister Abe expressed his aim to support sustainable and environmentally friendly economic growth. Abe requested APEC members to join him in promoting green infrastructure projects. In particular, Abe pressured the Indonesian government to promote the coal-fired power plant project in Batang which boasts technology that could support the fight against climate change.

Abe argued against environmentalists’ claims that the power plant would produce large amount of CO2 emissions. The Indonesian power plant will adopt Ultra Super Critical (USC) Generation Technology which burns coal at a very high temperature. The Prime Minister claims that by using this technology, the power plant can increase its combustion efficiency up to 43% which is 10% higher than the global average. However, the 2,000MW large scale power plant can potentially emit approximately 10.8 million tons of carbon per year even with sophisticated technology. This amounts to the total carbon emissions of Myanmar for 2009. This is in direct conflict with Indonesian President Susilo Bambang Yudhoyono’s 26% greenhouse gas reduction (below the business-as-usual level) by 2020 commitment.

When the two leaders sat down to discuss the energy issue, Yudhoyono’s expressed his appreciation for Japan’s interested in the Batang power plant which he hopes can strengthen relations between the two countries. In return, Prime Minister requested Indonesia’s support for Tokyo’s 2020 Olympic preparations.

With the recent push towards promoting sustainable energy, continuing this power plant project will not be best route. Prime Minister Abe should promote the investment of facilities that better reflect environmentally friendly economic growth as he himself stated at the APEC summit. If Abe follows through with his words, coal should not be an option.