The Japanese government’s Strategic Energy Plan designates coal-fired and nuclear power plants as “an important base-load electricity source,” and, based on the Plan, the Long-term Energy Supply-Demand Outlook designates the power supply composition as 20-22% nuclear, 22-24% renewables, 27% LNG, 26% coal, and 3% petroleum. To meet the 1.5°C target under the Paris Agreement, it is necessary for developed nations to phase out coal-fired power by 2030, yet the power supply composition set in the Outlook is far from meeting that target.

However, the Aggregation of Electricity Supply Plans for FY 2020 (in Japanese), released on March 31st, 2020 by the Organization for Cross-regional Coordination of Transmission Operators, Japan (OCCTO), shows that power suppliers are planning to generate a far larger share of electricity from coal-fired power plants than designated in the Outlook. In the Aggregation, the power supply composition of FY 2029 is 28% renewables (18% new energies [wind, solar, geothermal, biomass, waste] + 10% hydro), 4% nuclear, 28% LNG, 37% coal, and 3% petroleum. Based on the Aggregation, the share of electricity generated from coal-fired power plants in FY2029 will increase by about 17% compared with FY 2019. This means that coal will have the largest share of electricity generation and also greatly exceed the 26% by 2030 as set in the Outlook. 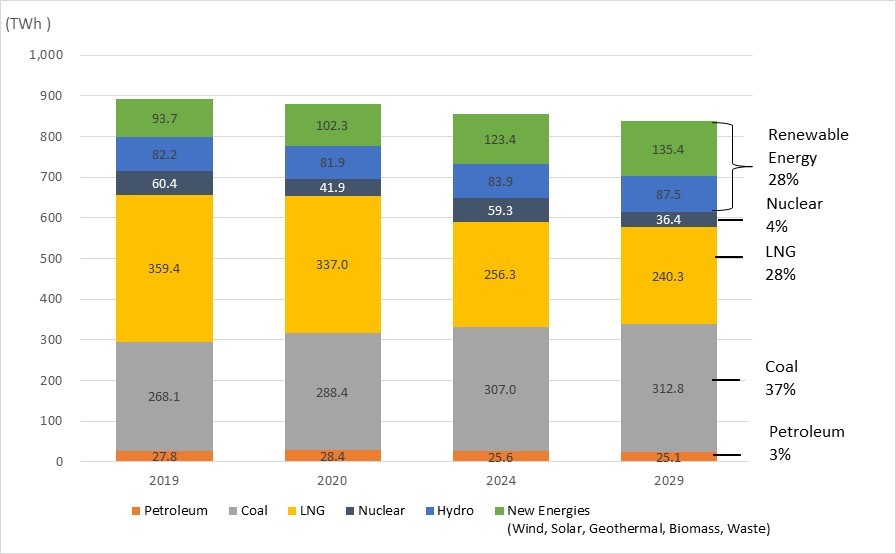 Capacity factor of coal-fired power to be maintained at approx. 70%

From the Aggregation, it is clear that the policy of power suppliers is to further increase the capacity factor of high carbon coal-fired power plants. As a result, the expected CO2 emissions from coal-fired power plants in FY 2029 under the plan will be enormous – estimated to be about 266 million tons*. This policy is contrary to the policy direction stated in “The Long-term Strategy under the Paris Agreement,” approved by the Cabinet in June 2019:

If this situation continues, it is evident that Japan’s coal phase out will not progress any further. In order to realize net zero emissions by 2050 and a “decarbonized society,” the Japanese government should strive to change its climate and energy policy, including revising the electricity mix and clearly stating a policy to reduce coal dependence.

*Estimation based on the expected power generation (net) in FY 2029 under the Aggregation of Electricity Supply Plans for FY 2020.