In Japan’s Strategic Energy Plan, coal and nuclear power are regarded as “important baseload power sources.” Based on this, in the Long-term Energy Supply and Demand Outlook, the power supply mix in 2030 will be 20-22% nuclear power, 22-24% renewable energy, 27% LNG, 26% coal and 3% oil. Achieving the 1.5°C target under the Paris Agreement will require zero coal power by 2030, but the Japanese government’s Outlook has drawn much criticism for being so far from the target. However, a summary of the electricity supply plan presented in the spring of 2019 by the Organization for Cross-regional Coordination of Transmission Operators, Japan (OCCTO) revealed that the use of coal will continue to increase significantly more than in the Japanese government’s policy.

In the Aggregation of Electricity Supply Plans, the power utility companies’ forecasts for the next 10 years are compiled, and it concludes that by 2028, nuclear power plants are not expected to have restarted and nuclear power generation will remain at 4%, with renewable energy at 26%, LNG 29%, coal 37%, and oil 3% (Graph 1). That 37% of coal is a natural consequence of the Japanese government’s policy signal, which has so far focused on coal with almost no attention paid to carbon pricing. On the other hand, in regard to thermal power, while the share of LNG is expected to significantly decrease from 41% in 2018 to 29% in 2028, coal-fired thermal power will increase significantly from the current 30% to 37% in 2028, with the amount of power generation itself increasing from its current level. 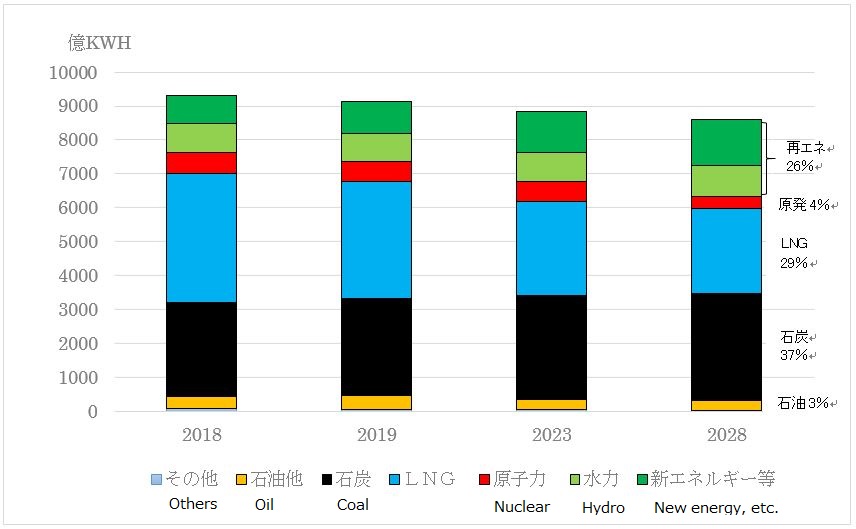 (Legend: Oil and others, Coal, LNG, Nuclear, Conventional hydropower, Pumping-up, New energies)Once again, the trend of increasing power generation facilities has become clear. In addition to coal, LNG also has plans for new installations at nearly the same scale, with new plans for 8.24GW of coal and 7.81GW of LNG. Rather than “reducing thermal power dependence” as indicated in the long-term strategy under the Paris Agreement, a trend of “increasing thermal power onward” has been highlighted.

The government has declared a “fade-out of inefficient coal-fired power,” but according to power generation companies’ power plant retirement plans, only 756 MW of coal will be discontinued by 2028, less than 10% of new plans. More LNG power is planned to be discontinued than coal (5.29 GW), but it still does not match the scale of the plans for new installations. In addition, the “capacity market” introduced by the Ministry of Economy, Trade and Industry next year will provide an incentive allowing aging thermal power technology to persist like a zombie. 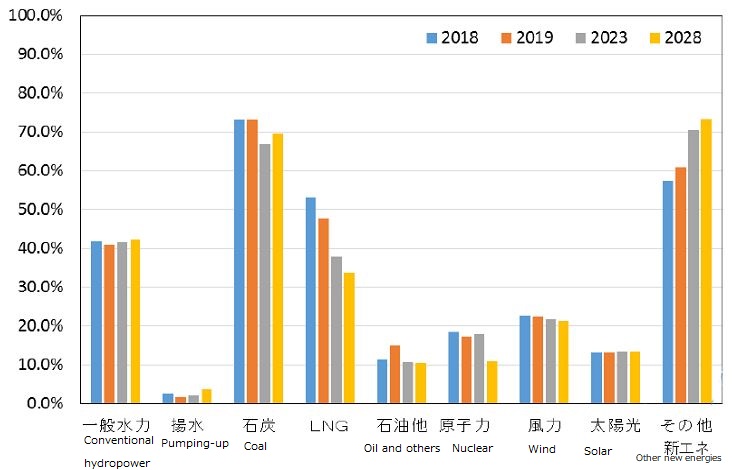 With the goal of achieving the percentage of each power source indicated in the 2030 power supply composition, the Ministry of Economy, Trade and Industry is currently working on measures that include numerical targets in the Energy Supply Structure Advancement Act, the Energy Conservation Act, etc., and is introducing a series of policies that will in effect skew the electricity market. Additionally, “implementation of a decarbonized society,” “reducing CO2 emissions from thermal power generation,” “fading out inefficient coal-fired power generation,” and “reducing reliance on thermal power generation,” are all stated in its long-term strategy, but OCCTO’s announcement revealed that coal-fired thermal power will in fact continue to increase. As each power utility company continue their business with only voluntary measures to combat climate change, coal-fired thermal power will increase significantly, inevitably pushing us far away from realizing a decarbonized society. Before it is too late, we must begin a policy shift and move to reevaluate our system to accelerate renewable energy.