Campaign by Oakland residents against the export of coal to Japan

Since Japan has no domestic sources of coal, it relies heavily on coal imports.  As the world pushes forward with anti-coal movements, these include movements to stop exporting coal to Japan. No Coal in Oakland (NCIO), in Oakland, California, USA, is a grassroots organization working to stop the export of millions of tons of coal to Japan each year. NCIO aims to prevent the plan of a port terminal to be used for exporting coal.

No Coal In Oakland (NCIO) 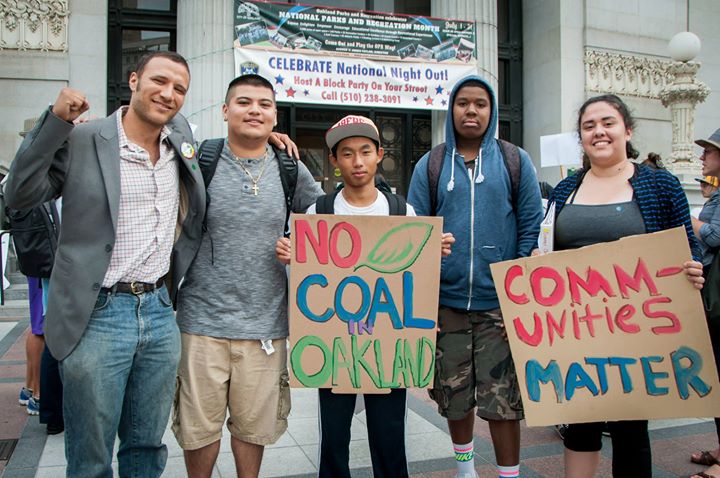 No Coal In Oakland (NCIO) is a community organization working to prevent a planned marine terminal in Oakland, California from exporting millions of tons of coal to Japan each year.

A bulk-commodities marine terminal is planned for Oakland on the east shore of San Francisco Bay. In 2015 we learned that the developers were secretly discussing using the terminal for coal. No Coal in Oakland (NCIO) came together then to keep coal out of the terminal. NCIO is a community-based organization.

Why is coal a problem?

Coal kills miners and people living near coal mines and power plants. It also sickens and kills all along the supply chain. The transportation, storage, and handling of coal all release coal dust. The dust includes microscopic particles, PM10 and PM2.5, that are known to cause severe illness and death. These particles cause inflammation and damage the lungs, heart, and blood vessels. This leads to heart attacks, strokes, asthma, dementia, diabetes, and many other health problems.

The proposed terminal would be adjacent to the Port of Oakland. The Port of Oakland has long been a center for highly-polluting diesel truck traffic. This has caused disproportionately negative health impacts for the residents of West Oakland, who live near the Port and proposed terminal.  Our community is fighting to reduce the pollution caused by the Port’s activities. We have made some progress. We will not allow toxic coal dust to take us backward and further threaten our health.

Construction of the terminal–Oakland Bulk and Oversized Terminal (OBOT)–was approved by the City of Oakland.  OBOT would allow export of commodities that cannot be shipped through the Port of Oakland, which only handles container ships. For years the developers assured the community that the terminal would not handle coal. But community members learned in April 2015 that developers had secretly planned to export coal mined in the state of Utah. NCIO was established to challenge this plan. We support the construction of the Oakland Bulk and Oversized Terminal and the jobs it will bring. But we reject the developer’s claim that coal shipment is needed to sustain the project. We also reject the claim that fewer jobs will be created if coal is excluded. Environmental justice and protection of the climate must go hand-in-hand with redevelopment of Oakland’s waterfront.

NCIO was joined in opposition to the use of the terminal for coal by thousands of city residents; numerous local labor unions, faith leaders, health professionals and community organizations; local and state officials; and national and international environmental justice organizations.

During public hearings in 2016, the Oakland City Council heard scientific evidence that coal dust would harm the health of residents of the neighboring community. The City Council then unanimously enacted a city-wide ban on the storage and handling of coal. We applaud our city government for protecting our community from the addition of yet another source of toxic pollution in West Oakland.

The developer sued, and the court’s decision will have a strong influence on the future of the terminal.  Meanwhile, the prospective operator of the terminal has been in discussions with Japanese businesses. Japanese major power supplier JERA discussed guaranteeing purchase of up to 4 million metric tons of coal per year to be burned in Japanese power generation plants. Sumitomo Mitsui Banking Corporation (SMBC) discussed financing the full construction cost of the terminal, approximately $240 million. SMBC’s involvement conflicts with its newly-announced policy to limit investment in coal. Any investment in coal infrastructure is an investment in future operation of coal-fired power plants. If SMBC is contemplating financing the Oakland Bulk and Oversized Terminal as a coal terminal, it will face substantial international opposition.

NCIO looks forward to ongoing collaboration with Kiko Net and others to fight this threat to communities in California, Japan, and around the globe.

Further details about the campaign can be found at NoCoalinOakland.info.