A project to develop the Maules Creek Coal Mine, next to the Boggabri coal mine project which was introduced on this website, has also been confronted by residents’ protest.
However, as in the Boggabri case, the expansion is progressing regardless of their opposition.
This project is operated by Australian coal corporation Whitehaven, with 10% of the shares attributed to J-POWER, and 15% to Itochu.
Furthermore, the produced coal will be exported to Japan.
This project has a deep connection with Japan.

It is predicted that the extracted coal will emit 30 million tons of carbon dioxide each year, and will last for 30 years.
These emissions add up to to double the amounts by which Australian government aims to reduce emissions from 2014 to 2020.
Therefore, however hard Australia tries to reduce its carbon emissions, this single project could offset these entire efforts.

What is more, local residents who are already suffering from droughts are concerned that the Maules Creek Coal Mine might use three billion tons of water and thus lower the water level by six metres.
This possibility further threatens local livelihoods.

T here are many other problems with the Maules Creek Coal Mine project, such as negative impacts on the local ecosystems and the sacred forests of the Gomeroi indigenous group. 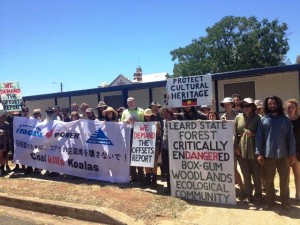 Local residents, Australian and Japanese NGOs are opposing this project.

In July 2013, Northern Inland Council for the Environment, a local NGO network, went to court to pursue the cancellation of the government permit granted to this project.

In December, the case was dismissed. In January 2014, thirteen NGOs in Japan and Australia submitted a letter to J-POWER and Itochu together, highlighting the serious impacts of this project, and hence the protest continues.

We believe that the project operators should listen to the residents’ voices at the very beginning of such a plan, and that J-POWER and Itochu must respond to the continuous opposition.

＊On the website of Greenpeace Australia, there is a detailed introduction of problems concerning the Maules Creek Coal Mine project.

2013/12/17 Local opposition against mining in Australia getting stronger