“We want patients to live in an environment where they can have peace of mind. We don’t want a new power plant to be built.”

On April 20th 2015, due to the possible air pollutions and CO2 emissions from Kobe Steel’s new power plant in Nada Ward in Kobe City, representatives from The Association of Osaka and Kobe Patients of Pollution-Related Diseases and CASA (Citizens’ Alliance for Saving the Atmosphere and the Earth) had a meeting with Kobe Steel at the Hankyu Grand Building Conference Room. In attendance were patients and their families (a total of 22 guests) and Kobe Steel representatives such as Director of the General Affairs Department and  Director of the legal department. 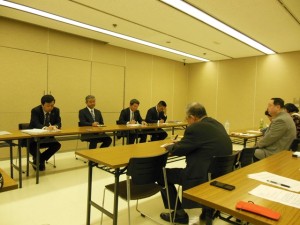 Kobe Steel already has a coal-fired power plant in operation site with a capacity of 1400MW. Last December, the utility submitted a planning phase environmental impact statement to the Minister of Economy Trade and Industry for a new coal-fired power plant on the same site with a capacity of 1300MW. The environmental assessment of this project is now in progress.

Patients group and CASA submitted a joint statement concerning Kobe Steel’s environmental impact statement and requested to have a meeting. The meeting was subsequently set to deliver their concerns with the utility.

Kobe resident Tatsuo Kono (aged 65) stated that he was diagnosed with a pollution-related illness in 1977, the effects of which brought him much suffering for nearly 10 years since at the age of 26, depriving him of his youth. Because of his sickness, he did not even consider getting married. He appeared apathetic while describing how his life had derailed since he became sick.

Harumi Yamashita (aged 65) from Nishiyodogawa in Osaka has been assisting her husband who has been suffering from asthma (severity level 2). She described an incident when her husband had to be taken to the hospital because he had a seizure at work, but he ultimately went into cardiac arrest. Her husband’s eyes had overflowed with tears as both his hands and feet were tied down while on a ventilator. She fought back tears explaining that she had worked hard to give his children and grandchildren the gift of clean air but was unable to once new power plant are built.

According to Kobe Steel, full consideration for the environment has been taken for the new power plant by installing state-of-the-art equipment and stated that the project meets the demands of society. Patients group pointed out that it is not convincing for operators to say they comply environmental standards without disclosing absolute amount of greenhouse gas and air pollution emissions from their power plants, which capacity will doubleKobe Steel only replied that they don’t know (about the emissions) as it is still in the beginning stages of their environmental assessment.
Kobe Steel promised that talks on the disclosure of emissions data (as requested by the patients) will continue in August with the release of the assessment’s scope document.

“Citizens Network for the awareness of coal-fired power plant issues” is also campaigning against Kobe Steel’s project.
The utility should sincerely listen and consider these local people and organization’s concerns.