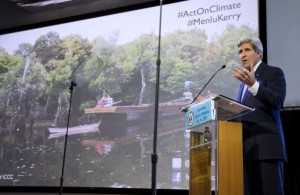 US Secretary of State John Kerry addressed the topic of climate change in Jakarta, Indonesia on February 16th, 2014. Kerry’s comments regarding the dangers of climate change as being comparable to a weapon of mass destruction resonated around the world. His speech touched on the many issues related to climate change, including coal: the dirtiest energy source that we use today. Kerry’s impassioned speech was filled with facts and figures showing the unfortunate side effects of climate change: a seemingly never-ending drought in California, lung cancer in children, rising sea levels, and hurricanes. The list goes on. Like anything else, the topic of climate change attracts its fair share of naysayers. The evidence, however, is staggering. Currently 97% of scientists are in agreement that climate change is real. Kerry emphasized that “we need to listen, and we need to respond.” Kerry highlighted that we need to make smarter choices about our energy. One way this can be achieved is by governments and international financial institutions to end their support of energy sources like coal. Instead we need to focus on innovative energy technology. Included in the speech was the example of Sky Energy, a company in Indonesia, which is moving forward with the construction of battery and solar storage and other projects which can bring enough electricity for entire villages. He pressed the point that we need to really look at the very real effects of coal on the environment and on our health. Coal is a main cause of acid rain, which pollutes our waterways, affecting our food and jobs. Of course, the most well-known example showing the negative side effects of coal is China and its smog problem. Smog affects the GDP by as much as 8%, a result of falling agricultural output and rising healthcare costs. In his speech he urges the citizens of the world to speak up and demand change from the leaders of their countries that we must “make climate change an issue that no public official can ignore for another day”. Kerry tells it like it is. It is imperative that a major shift towards cleaner energy must be made today if we are to realize our climate change goals of tomorrow. It is also imperative that the leaders of the countries must hear their citizen’s voices. Source: U.S. Department of State: Remarks on Climate Change, February 16th, 2014 http://www.state.gov/secretary/remarks/2014/02/221704.htm Photo source: AP Photo/Evan Vucci