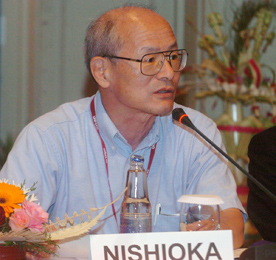 November 2013, international leaders and experts from around the world, including Japan, were in Warsaw to attend COP19. Concurrently, the government also endorsed the World Coal Association (WCA)’s International Coal and Climate Summit where major coal companies, policy-makers and others gathered to discuss coal and its association with climate change.

In the WCA’s call to action entitled “The Warsaw Communiqué”, they called for the “immediate use of high-efficiency, low-emissions coal combustion technologies” in order to lower greenhouse gas emissions produced by coal-fired power plants.

On November 18th, in response to the WCA’s claim, a group of 27 scientists from 14 countries (including Dr. Shuzo Nishioka, and Dr. Mikiko Kainuma, both from NIES) released a joint statement that publicly renounced the claim that “high efficiency” coal is a climate change prevention measure. In their joint statement entitled “New unabated coal is not compatible with keeping global warming below 2°C”, the scientists warned that global warming levels below the 2°C level limit cannot be achieved without carbon-capture storage (CCS)* technology.

They stressed that unabated coal is not “low carbon” as even the most efficient coal-fired power plant can emit 15 times as much CO2 emissions (per kWh) as renewable energy. To curb dangerous rises in greenhouse gas emissions, fossil fuel reserves must be left underground and we must stop using unabated coal now. They caution that if we continue on our current path, we may reach a 4°C warming by 2100 which can lead to extreme climate conditions. Even though major financial institutions like the World Bank, the European Investment Bank and the US Export-Import Bank started to make commitments to restrict unabated coal, the scientists say more needs to be done.

The former Co-chair of the IPCC’s Working Group on Climate Change Mitigation, Dr. Bert Metz, stated that coal-fired power plants can have a lifetime of 40-50 years but in this period we must reduce our emissions. It is impossible to achieve this with unabated coal.

This is especially pertinent for Japan as the Japanese government is promoting clean-coal as a climate mitigation measure all the while announcing their unambitious new 2020 emissions reduction target of 3.8% from 2005, which is a huge break away from the Kyoto Protocol’s 1st commitment period target. In addition, Japanese financial institutions like JBIC continue to show their financial support for coal-fired power plant projects around the world. To stay below the 2°C target, Japan needs to listen to what scientists have to say about coal, and take more proactive actions.

*Coal is considered “unabated” if it is burned without using CCS technology.