Three months have passed since U.S. President Obama announced his “Climate Action Plan” in June 2013. After lengthy consideration by the EPA (Environmental Protection Agency), they have proposed strict standards for new power plants in order to cope with climate change. 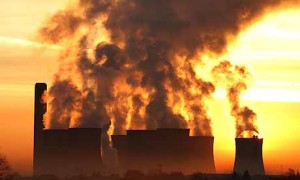 The proposed EPA standards released on September 20th will be under the “Clean Air Act” . Under these standards, new coal-fired power plants must meet the strict emission standard of 1,100 pounds of CO2 /MWh (500g of CO2/kWh). Currently, at Isogo thermal power plant in Yokohama, which uses Ultra Super Critical (UCS) coal-fired power generation technology, it is said that their CO2 emissions are measured at about 800gCO2/kWh even though J-power “boasts” that it has the world’s highest efficiency. In addition, given the utilization of IGCC (Integrated gasification combined cycle) technology which is known to have higher efficiency of 710g CO2/kWh (initial estimation), it is easy to see that none of the existing, highly efficientplants can meet the stringent standards set by EPA.. Actually, if new coal-fired power plants were to be constructed to meet these higher standards, they would be required to use CCS (carbon capture and storage) technology or biomass co-firing. This would, of course, make it more expensive to generate electricity. Thus, the proposal to stop constructing new coal fire power plants should be considered. Taking into account the pros and cons mentioned in the approximately 2.5 million public comments received to date, it is very important to take this step in order to realize Obama’s “Climate Action Plan”. This proposal is set to be put into effect on June 1st, 2014.