Despite putting endangered species in Boggabri at risk, Ministry of Finance says reconsidering investment in mine not necessary

The Australian environmental network Northern Inland Council for the Environment (NICE) brought a case to the court that argues that the project approval the companies Whitehaven and Idemitsu Kosan Co. Ltd. (Idemitsu) received from the government should be revoked. However, on December 20th, 2013, the lawsuit to was rejected as “no problems were found with how either company obtained the project approval”.

It goes without saying that environmental groups such as NICE and residents need no convincing to continue protesting against the project, with some activities going as far as shutting down work for the day. On March 9th, to prevent the clearing of an adjacent forest, a tree-sit took place. The Japanese NGO JATAN (Japan Tropical Forest Action Network), a supporter of the protests, has been keeping a close eye on the developments.

Day by day protesters, including indigenous groups, continue to question Idemitsu’s responsibilities.
In addition, companies that are being called into question include JBIC, which is providing the funds to Idemitsu, and the Ministry of Finance which has been authorized to supervise JBIC.
The Ministry of Finance stands by the position that “appropriate considerations have been taken for both the environment and indigenous groups”, but if that is true protests like these would never have taken place.
Needless to say, it is necessary for both JBIC and the Ministry of Finance to look over the problems again and reconsider plans for this mining project. 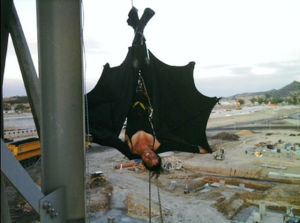 Although Idemitsu was required to submit the results of a 3rd party assessment to the Ministry of Environment concerning the ecology of an area put aside as part of their offset, the assessment didn’t include the endangered Box Gum.
Local ecologist and protestor of the project, Phil Spark stated that “it is alarming that Idemitsu can raze critically endangered forest for an open cut coal mine, when there is no assurance that the same quality and quantity of that ecological community exists in their offsets”.

In particular, there are many rare bat species that inhabit the area which utilize hollows of old growth Box Gum as well as in fertile soil.

As Idemitsu set aside land that fails to embody these characteristics, these valuable ecological features are sure to fall dramatically.

In May 2013, the Japan Bank for International Cooperation (JBIC) decided to invest 350 million USD for Idemitsu’s Boggabri project. The Ministry of Finance, which has jurisdiction over JBIC, has determined that it is not necessary to reconsider the case as sufficient measures were taken for the offset (link in Japanese only).

The full article can be seen here (Japanese only).