Local opposition against mining in Australia getting stronger

The Japanese petroleum company “Idemitsu” ’s mining expansion project in Boggabri (New South Wales, Australia), where vast forest with rich biodiversity still remains, continues to progress. The voice of protesters, including locals, farmers and environmental activists has been getting even stronger.

In July 2013, a network of local environmental groups, “Northern Inland Council for the Environment (NICE)” brought the case to the federal court to argue against the approval of Idemitsu’s project and the adjoining mining project of the Australian company “Whitehaven”. The hearing was held last September but the court’s decision will not be announced until February 2014 at the latest.

NICE claims the projects will have a devastating impact on the environment. The project puts an area that includes 396 fauna and flora, some of which are critically endangered, at risk. Furthermore, the projects may cause ground water depletion and produce approximately 18,000 tons of dust each year which may bring health problems to residents near the sites. There is also strong concern about the rushed nature of the approval process. To make matters worse, the environment impact assessment reports of the projects include false and misleading information. For example, Idemitsu states that the project will not impact the ground water, contrary to local opinion.

The problems don’t stop there. The aboriginal group, the Gomeroi people, voiced their opposition against the mining projects in New South Wales including Boggabri because they were not consulted properly before the approval. The project will encroach on the Gomeroi people’s land and affect their forests and cultural heritage. In November, 2013, almost 100 Gomeroi people and their supporters gathered to protest in Sydney. 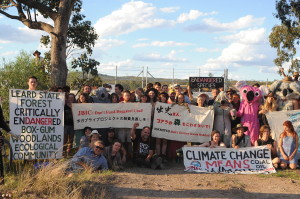 photo：Alex Bloom
December 15th, 2013 marks the 500th day since the protest camp was set up near the site. A crowd of people gathered to take part in a protest that lasted for 3 days, from December 14th to 16th, which featured signs such as “IDEMITSU : Don’t Destroy Koala Habitat !”. One of the main proponents of this protest in Japan is the NGO JATAN (Japan Tropical Forest Action Network).

Another target of this protest is JBIC (Japan Bank for International Cooperation), which has invested 350 million USD in the Idemitsu project. According to “JBIC Guidelines for Confirmation of Environmental and Social Considerations”, projects must consider the environment and indigenous people. But seeing the situation in Boggabri as it is now, can anyone say Idemitsu is following the guidelines?

JBIC Guidelines for Confirmation of Environmental and Social Considerations
http://www.jbic.go.jp/en/efforts/environment/confirm

JATAN are Opposed to Idemitsu’s Boggabri Coal Extension – Their Mining Extension Could Have Big Impacts on Environment and Local Communities – (2013/12/16) http://www.jatan.org/?p=2855