Coal-fired power generation, an old-generation technology, emits a substantial amount of carbon dioxide (CO2). Even with the best available technology, the fact remains that burning coal still emits twice as much CO2 as gas-fired power. In Japan, when the outlook regarding the operation of nuclear power plants became uncertain after the Fukushima Daiichi Nuclear Power Plant accident in 2011, the national government and businesses largely turned to coal-fired power and rushed to proceed with plans for the construction of new power plants. However, this movement is opposite to the direction of global trends.

Up to 50 new construction plans have surfaced since 2012 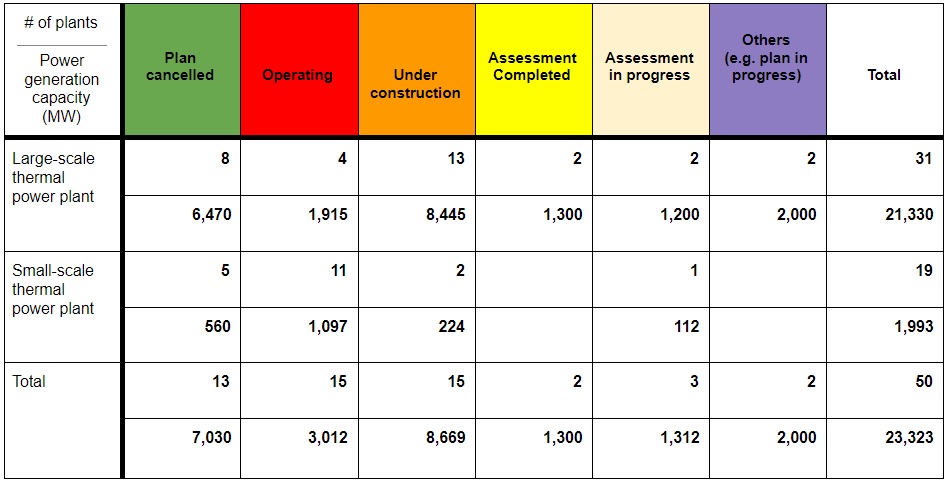 Residents and citizen groups organized opposition campaigns in Chiba and Kanagawa prefectures on the coast of Tokyo Bay, as well as in Sendai and Hyogo prefectures. As a result, 13 construction plans have been canceled. However, 15 units, mainly small-scale plants with an output of less than 111.25 MW, have started operation, and 15 more units are currently under construction. Of the latter, many are large-scale power plants (Table 2), and if all 15 plants begin operation (along with five more that are advancing into the environmental assessment stage), Japan’s CO2 emissions will increase by 7-8%. 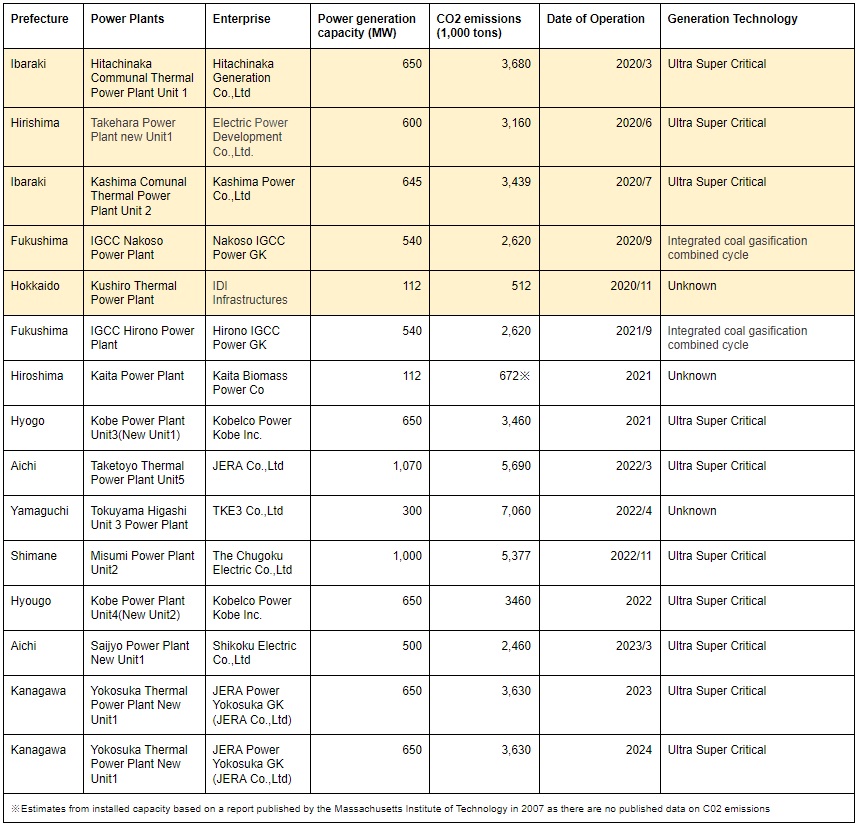 The cost of power generation from a coal-fired power plant decreases the longer a plant is active, and so once a plant begins operation, it is likely to continue operating for a long time – and emitting a substantial amount of CO2 over that period.

At the Tokyo Olympics to be held this July, the location of marathons and race walks has been changed to Sapporo due to concerns about the effects of climate change such as intense heat. In response to the large amount of energy that will be used by the Olympic Games, the Tokyo Olympic and Paralympic Games Organizing Committee established a plan to completely offset the approximately 3 million tons of CO2 associated with the Tokyo 2020 Games in aiming “toward a decarbonized society.” However, five new coal thermal  power plants will be put into operation in the same year (see the highlighted cells in Table 2). By simply dividing by month the annual CO2 emissions of the three units scheduled to start operation before the Olympics (Hitachi Naka, Takehara No. 1 and Kashima No. 2) and totalling the emissions from the start of the plants’ operation up until September when the Paralympic Games are held, the total emissions during that period are likely to exceed the amount offset.

In addition, this year also marks the start of the Paris Agreement, which sets the target of keeping the global temperature rise below 1.5 to 2°C. However, even if we do manage to achieve this goal, climate-related disasters will only grow in severity compared to now. Significantly, the current targets and actions of the world’s nations are not enough to keep the rise in temperature below 1.5-2°C. With the current Nationally Determined Contributions (NDC), the world will see a 1.5°C rise by 2030 and continue to rise to levels of over 3°C. To put it simply, boldly strengthening our actions by 2030 is a necessity. The question we face is if we can significantly transform our fossil fuel-centered energy system in the next ten years by 2030.

Zero coal is a global imperative

Around the time the Paris Agreement was established, it was pointed out that to achieve the 2°C goal, we cannot burn 80% of buried fossil fuel resources, and the use of coal-fired power generation without applied carbon capture and storage (CCS) technology would also be inconsistent with this target. Furthermore, in order to align with the 1.5 °C target, the amount of power generated using coal must peak this year and then swiftly decrease in every region of the world, requiring by 2030 an 80% reduction compared to 2010 levels, and be phased out completely worldwide by 2040. At the UN Climate Action Summit in September 2019, United Nations Secretary General António Guterres called for all countries to reduce their greenhouse gas emissions by 45-50% by 2030. He calls on every nation to come up with a plan that would be consistent with the realization of zero emissions by 2050, while also calling to eliminate construction plans for new coal power from 2020. On the first day of the COP25 conference held in Spain in December 2019, he asked for the world’s cooperation in rapidly reducing coal-fired power generation.

Reducing CO2 emissions – especially achieving zero coal – is a global imperative. It is difficult to understand why Japan, a developed nation and the world’s fifth-largest emitter of CO2, continues to promote coal power. It is absolutely crucial for the companies involved in building the 15 planned coal-fired thermal power plants to make the firm decision to end construction as soon as possible.