The Abe administration of Japan is taking a position of supporting coal fired power plans.  At the same time, the media is reporting that coal is cheap.  But is coal really cheap?

It is not easy to compare the cost of various power generation types.

For example, in the case of thermal power generation, the generation cost fluctuates with the unit price of fuel.  For power plants with large initial capital investment, the number of years the power plant would operate determines the depreciation cost.

Therefore, certain conditions must be assumed to compare costs.

In 2012, the Japanese government established the “Cost Verification Committee,” and produced a report that analyzed the cost of different power generation types.  Figure 1 is a graph comparing the cost of coal power and LNG power based on the committee’s calculations.

In both cases, the fuel cost accounts for the largest share of the costs.  It accounts for more than 70% of costs in the case of LNG, while capital cost and CO2 countermeasure cost take up a relatively large proportion in the for coal.

If the cost difference is only about 10%, coal should not be blindly endorsed.  Cost of power generation should be examined more carefully.

Furthermore, changing the conditions of the calculation slightly could completely alter the result. 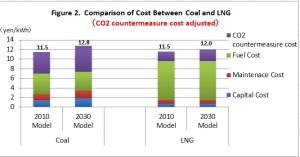 Therefore, coal seems cheap only because proper counter CO2 measures are not in place.  Not including CO2 countermeasure cost simply delays necessary costs to future generations.

If environment policies are strengthened, then coal power plant operating businesses would need to increase the cost of CO2 countermeasures.  It is the power producers themselves who best understand the risk of maintaining coal fired power plants that are less cost competitive.  The old legend that coal is cheap must be thrown away.

(*) See “Cost Verification Committee Report” for detailed calculations. The main conditions are “3% discount rate, 80% load factor, 40 years of operation” and are common for both coal and LNG.