In the province of Central Java in Indonesia, Japanese companies supported by Japanese government are promoting the construction project of Batang coal fired power plant (2000MW), the largest power plant in Southeast Asia.  Currently, there are large protests against the project. 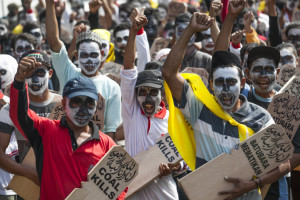 Local residents, together with various NGO’s, are vigorously opposing this project, in which their land will be acquired and serious damages will be inflicted to the region’s environment.

Local residents are raising their voices, 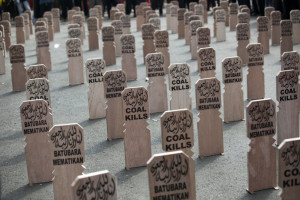 Because of the opposition movement, land acquisition is not going smoothly and the original plan to begin construction October of 2012 has been postponed.

The Japanese government is claiming that the export of highly efficient coal fired power plants is a contribution to the fight against climate change, and the government is actively endorsing these projects.

However, even if it is called highly efficient, the power plant will release 10 million tons of CO2 every year once constructed.  This is about the amount of emissions that the entire country of Brunei emits, and it will greatly increase Indonesia’s CO2 emissions.  Can this really be called sustainable?

On July 5th, with the examination of the project’s environmental assessment, about 1000 people gathered for a demonstration. The article on the demonstration can be found below.

What is the legitimacy of a project that helps neither the residents nor the environment?

This news was published in Mainichi Shimbun on June 28th and July 5th.

See below for further detail