Opposition against the Coal fired Power Plant in Indonesia Intensifies

It was mentioned in an article from July 8th that Batang coal power plant in Indonesia led proceeded by Japanese businesses together with local businesses is facing resistance from the local residents, and the opposition movement is continuing to intensify.cle 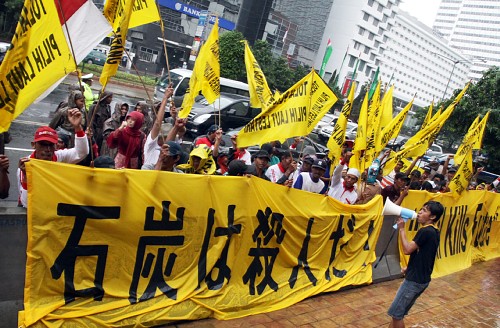 On July 22nd, roughly 120 local residents gathered in rain and demonstrated in front of the Japanese embassy in Jakarta.  They submitted a letter addressed to Prime Minister Abe to the embassy representative.  The letter illustrated the concern and fear of the residents that the power plant will destroy their environment and livelihood.  The letter ended with a sincere request to the prime minister asking for the suspension of the project. (Click here to read the letter)

On July 30th, violence erupted between the police and the locals.  It was reported that, when around 500 people gathered at the construction site to stop the work, a few hundred policemen, military men, and thugs assaulted the residents, beating and kicking the people violently. The police denied any use of violence, and instead stated that police officers were attacked by the locals with mud; however, an eyewitness reported that about 17 people were injured and Batang is the situation is chaotic.

Right now, about 50 landowners who together own about 20% of the planned construction site are refusing to sell their land to the businesses.  If the companies do not acquire the land by October 6th, they will lose the right to construction. Itochu, J-Power, and other businesses do not have much time now.

In response to the voice of the residents and their fervent movements, the Kiko Network and Greenpeace Japan together sent a letter to Prime Minister Abe and JBIC on August 21st as a follow up to the letter by the residents asking for the project’s suspension and to emphasize the cost of the Batang coal fired power plant project (Click here to read the letter).

Hoping that the government and the businesses will reevaluate the project after hearing the voices of the local people, NGOs and Japanese NGOs, we will continue to watch over the state of affairs.